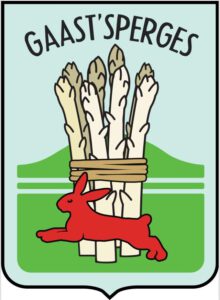 Gaast’sperges is a combination of Dutch words which stand for “asparagus from the region Gaasterland”. These asparagus are also being cultivated on a “gaast”… But what is a “gaast”?

The rolling landscape with its forests and tree lanes characterizes this farms region called “Gaasterland”. That landscape type stands out of the rest of the Friesian flat meadow landscape.

What follows here is a modest description of how this landscape of the region Gaasterland was formed.

The name “Gaasterland” comes from “the land of the “gaasten”. Such a “gaast” is a hill in the landscape, formed in the Saalian ice age (about 200.000 years ago). In that ice age a thick glacial layer of ice (which was about to 3 kilometers high), moved over the soil from Scandinavia towards the Netherlands. This layer of ice moved soil like a giant bulldozer towards the middle of the Netherlands and dropped deposits of soil in its movement. Where the ice stopped, heaps or hills of soil got deposit. These ridges of soil formed some of the higher areas of the Netherlands.

These deposits of soil can be seen in the rolling landscape of Gaasterland. We locals, call those hills “gaasten”.

These hills have two types of soil; loam and sand. The loam is heavier and comes from the stones that where crushed and grinded to loam by moving of the ice from the ice age. The loam forms the base of these hills. Water and the roots of plants can’t go through that type of soil. The sand layer on top of the hills came later, which was in the “Weichselian Middle Pleniglacial”. At that time there was a periodic cold and with that the water level of the North Sea lowered and big parts of the sea bottom where exposed. Exposed to the inland winds that blew masses of sand and covered almost the whole country the Netherlands. This sand that was taken along by the wind and which deposited. Which is called in soil science “aeolian sand”.

The region Gaasterland sticks out of the typical Dutch (and Friesland pasture) landscape like an “old island”. Other parts of the Netherlands like the island Texel, Urk (former island), Schokland (former island) and Gaasterland are all formed in the same time period through the ice in the ice age. Gaasterland lies partly on the water side and on the other sides there where swamps. De “gaasten” withheld the see and the water formed cliffs there, something that is unique in the country and only seen in Gaasterland. Nowadays a small dike protects these cliffs from the water and they have become overgrown by vegetation.

The swamps on the othersides of Gaasterland have been turned in to land (newfound land or “polders” as they are called). And that is how Gaasterland has become part of the main land.

The Region Gaasterland had long been the county “Gaasterland-Sloten” which got added to the bigger “Fryske Marren” county in 2014. Being born in Gaasterland, I enjoy putting the region on the map and menu-card. And with the asparagus grown on a “gaast” you can get a taste of Gaasterland.

The farms logo of Gaast’sperges is a friendly variety on the “coats of arms” of earlier county “Gaasterland-Sloten”. In the Netherlands every county has its proper “coat of arms” which is a heraldic shield. Since Gaasterland is not a county anymore, the region lost its “coat of arms”. This shield had a sheeve of reye in the middle with a hare underneath it. I replaced the sheeve of rye for a bunch of asparagus. We have many hares in Gaasterlad, a beautiful sight to see them. The hares though, they enjoy eating a small youngest sprouts of the new local asparagus. At that stage I chase the hares out. That is why the hare on the logo jumps out of the asparagus. When the asparagus is taller they don’t eat the plants anymore and use the tall asparagus crop rows for shelter.